You were sleeping under a rickshaw.
I put some biscuits near you. You woke up and i stepped away.

You got up and went away towards the Enclave.
I waited and it looked like you kept looking back at me and seeing me still here you would not return.

So I hid behind a tree and you looked back, and then returned.

Then you went and hid behind a large dump container.

A few visits made

I have made a few visits recently, and taken some pictures but not logged.

Yesterday, came there, and you were sleeping in the divider. I left some biscuits near you.

Last week I followed you a bit and took some pictures.

I must start uploading your pictures, my special angel.
Posted at 7:44 PM No comments:

I came the other day, you were asleep. I could not stay long as my mother has not been well. Not been able to get out.

We remember you all the time.
Posted at 11:34 AM No comments:

Day 9 after finding you

Today, dearest one you were at the dump itself.
You were wandering around looking for something but unable to find anything. I parked myself at the far end, but you moved towards the intersection end.

I watched from there but then moved to your side. You had come quite near the intersection and were looking around.

I stood outside the toilet. I tried to shoot a video but seems only the beginning and end got shot.

At one time you walked past me. I called out and whistled. You stopped and looked around and perhaps tried to figure out where the whistling was coming from. Do you remember the whistling ?

You were wagging your tail for most of the time you were wandering around. You do that quite a lot it seems. You walked past me, giving me a look and then went on back to the far side.

I came away and was to come back after a round but it became late and i did not return after the round of R block. If i had some food of your liking, you might have had it as you walked by.
Posted at 8:54 PM No comments:

Day 7 after finding you

As usual when I came, you were asleep on the divider.

I took a round of the R block district park and returned from the Chirag Enclave exit. You were coming from the GK Enclave - I side, crossing the road. I recognized you and followed you back. You crossed over to the dump and looked around for food.

Seems there was no food today. Maybe you have done a round inside the colony earlier. I stood around, took a few pics. You ignored me and walked around quite aimlessly. At one point as you walked by I whistled but you ignored me. Then it seemed you were keenly listening wondering where the sound was coming from. At one stage you looked back at me.

Then finally you crossed the road and curled up again.

Day 5 after finding you

As usual you were asleep on the divider when I came around 3:15 or 20. I took a walk around the neighbouring colonies and enclaves and R-block, and finally came back around 4:30 or so.

You were on the dump side, eating by the wall, just under the sign that said "Samovar". Frequently as you ate and walked around, you wagged your tail. One other large, black dog came around but said nothing to you. None of the dogs here seem to disturb you, so now I am wondering that you might have been here for longer.

You did see me and avoided me. At one time you seemed to hesitate to come to my side since you saw me.

Then I walked across, going by you and only then did you go over to the KECSS side. So i think you were wary of going to the side I was on.

Then after taking a bite, you curled up on the dump side and I left.

Prior to this, you did try crossing over to the divider. You hesitated several times in between and came back, then finally made it to the divider, then immediately came back.

I took no pics today as my phone battery was dead. I came back dejected. Seems you are now getting wary of me as someone to be avoided. Seems there is no progress at all.
Posted at 6:13 PM No comments:

Today I came to you around 3:15pm. You were curled up on the divider.
I stood around, whistled a bit. Then realizing that you would only come over later I went for a round of the R-Block district park.

When I returned, you were still curled up. I stood around for a bit. Then suddenly you saw a cat on the dump side and stood up. The male dog was also on this side.

You came over and the two of you walked around together. I was rather gladdened to see that you both got along okay.

Seems there was no food here. You looked around a lot. Then you both began walking away from the dump, past the KECSSS.

Then you crossed the road over to the other side, and walked into the colony. (It is either GK Part 4, or enclave. ). I followed you. You took a left toward the park and then a right before the park. You walked behind the houses looking for food.

I was glad that you had a nice colony to walk around in. I tried offering you biscuits but you ran past me around the park. I followed you, you took a left around the park. You saw a white dog in the distance near the gate, he came over and you both acquainted with each other near the entrance on the inside. I took a video.

Then the white dog went away disinterested.

I followed you around the park back to the main road of the colony.

Suddenly, 3 or 4 dogs came sprinting at you. Three continued and cought up with you. You stopped and tried to stand your ground. They backed off then.
Then i came out and looked for you. You were already at the dump.

You settled down on a large back. I came to you and tried to offer you biscuits but the motion frightened you and you walked away and were about to cross the road.

I called you and left the biscuits near one large can. I backed off making sure you could see i was backing away. Then i walked away and crossed the road, you could see me going. You again curled up on the same bag (like those plastic cement bags, or maybe gunny bags).

One more day and no progress at all. You are not interested in biscuits. I need something better.
It really seems that in five years you have had no human contact other than the snipping of the ear by MCD which would have traumatised you.

Are you happy where you are ? Where do you drink water, or is it the dirty black water at the dump ?
Are you comfortable here with that dog, and the KECSS and the Part 4 nearby ?
Posted at 9:06 PM No comments: 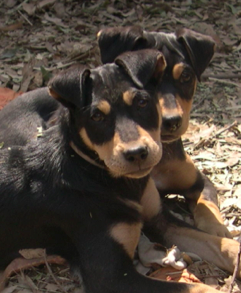 "Gabbar Singh Ji" (the missing one) with Sher S. (behind)